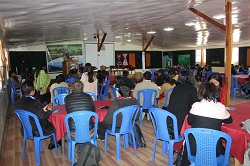 Martin Luther Christian University in collaboration with NERCORMP; RNBA, Manipur and North East Network organized a two-day North East Land Conference focusing on issues of Land, Laws, Local and Livelihoods on the 30th and 31st January 2020 at its premises at Nongrah, Shillong.

The key objectives of the seminar were to bring together like minded stakeholders to deliberate on the various issues concerning land like ownership and tenure systems, legislations as well as the customary laws that govern land ownership in the North East.

Speaking in the inaugural session, the Chief Guest of the Seminar, Rina Chandran of the Thomson Reuters Foundation, observed that women she has encountered in her various assignments around the world have always displayed a spirit of courage in the face of hurdles and felt that it was so with the women of the North East too who had to continually fight for their rights especially when it comes to issues of land ownership. 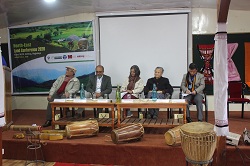 The inaugural session was followed by a technical session on ‘Community land governance and Customary Tenure: Documentations, Enquiries and Change dynamics.’ A paper on the security status of customary land tenure system from sustainable development perspectives was delivered by Dr. V.T Darlong, Vice-Chancellor, MLCU in which Dr. Darlong presented on a preliminary study of customary land systems through the lens of land based development programmes in NE India. 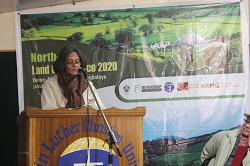 Another paper on the emergence of landlessness in Meghalaya was presented by Dr. Fabian Lyngdoh, faculty, MLCU in which Dr. Lyngdoh presented a detailed analysis of the history of the Kur, Raid, Hima and Syiem systems in Meghalaya and how they influenced the emergence of the various traditional and customary land ownership and inheritance laws that are practiced till date.

A panel discussion moderated by The Shillong Times editor, Patricia Mukhim was held on ‘Land Rights of Indigenous Women in NE India.’ The panelists included Agnes Kharshiing of CSWO, Meghalaya; Seno Tsuhah of NEN, Nagaland; Mayalmit Lepcha, IRN, Sikkim and Christina Lalremdik, Centre for Research and Advocacy, Manipur. The key point that was brought forth in the discussion was the fact that women lacked proper rights of property inheritance and ownership. This is worsened by the fact that women are losing their livelihood with land acquisition and occupation by various government agencies in the name of development. The panelists also pointed out that women do not have a say in issues of land as they are not part of decision making bodies in the community.

The last panel discussion of the first day was on ‘Land Right Issues in Manipur’ moderated by Dimgonglung Rongmei of RNBA, Manipur The panelists were EAC’s Simon L. Hrangchal and Holkhomang Haokip; PRDA’s L. Suranjoy Singh and PESCH’s Namkhinlung Pamei. The key points discussed were the exploitation of land by the local authorities of Manipur as the customary land legislature can be easily manipulated. Accounts of land conflict were also discussed. The panelists narrated about the various initiatives and measures taken to ensure security of the land tenure system, proper documentation being one of them. 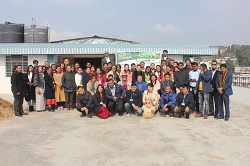 The second day of the conference started with a panel discussion on ‘Community Led Land Mapping for Customary Tenure Rights in Manipur.’ This discussion was moderated by Pravanjan Mohapatra of NRMC, Land Governance with Prisca Gonmei, Chingkhiungam Kamei and Julia Thalmei of RNBA Imphal, Manipur as the panelists. Other member of the panel included Gaihemliu Gonmei of PESCH; Julius Kamson of RBA; Samungou Seran of PRDA and L. Ruthy of EAC. The panelists narrated the various procedures and techniques of land mapping, measurement and documentation practiced and the advantages that each has had on the locals of Manipur. 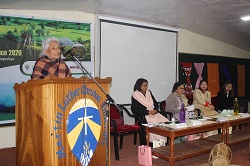 This was followed by a panel discussion on ‘Development, Investments and Displacement in NE India’ moderated by Shivani Chaudry from Housing and Land Rights Network, Delhi. The panelists included Anthony Debbarma of Borok Peoples Human Rights Organisation, Tripura and Jiten Yumnam of Center for Research and Advocacy Manipur. The panelists broadly spoke about the high rate of displacement in the NE region with people living under constant threat of eviction because of the various infrastructural and developmental initiatives. The panelists emphasized that the media should present the stories of these displaced people more as they are robbed of their very identity when their lands are stripped off them.

Another panel discussion was on ‘Gender, Identity and Land’ moderated by Akole Tsuhah. The panelists included Aunangla Nier; veteran jouralist Linda Chchakchchuak and Dr. Lavinia Mawlong, Center for Gender, MLCU. The panelists discussed on the forceful eviction of landowners who are removed from their lands without adequate compensation or, most often, no compensation at all. The panelists also concluded that community rights should not supersede individual rights. 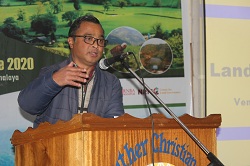 The final panel discussion of the Conference was on ‘Livelihoods, Land, Development Induced Land Acquisition and Laws’ moderated by Dr. V.T. Darlong, Vice Chancellor, MLCU. The panelists included Mihin Dollo, Director, NERCOMP and Thoudam James Singh. The panelists once again emphasized on the arbitrary customary laws of ownership and authority of the traditional heads that often deprive individuals of their land and that have to undergo a proper reevaluation.

Speaking in the valedictory session, Dr. Walter Fernandes, Former Director, NESRC, Guwahati stated that the real culprit is not customary laws but formal customary interference that are carried out with the intention of alienating tribal land that in turn causes class formation and the strengthening of patriarchy. He further stated that most often the pattern of infrastructural development is centered only in the urban areas. The solutions that Dr. Fernandes proposed are in terms of extending the public-private partnership to include civil groups, educational and medical facilities. He also proposed a relook into the customary laws to include protection against class formation as well as protection of the rights of women that go beyond the discourse of gender.